Stella Beder, one of the major contributors and shining stars of the South African musical scene over a number of decades passed away last month at the age of 88 and 8 months following a fire at her home in Melrose, Johannesburg.

Stella was a leading opera singer (Mezzo Soprano) with PACT for many years. Stella always recounted that she could not remember a time when she did not sing. She first sang publicly with her Aunt Ann Zulman at the age of 10 for soldiers returning from the Second World War. She went on to sing with the Jewish Youth Orchestra conducted by Solly Aronowsky at the age of 15. Stella undertook a legal secretary role in a firm of Attorneys and worked for Oliver Tambo who quipped with clients that while she was not the world’s best secretary she sang like a nightingale.
Tambo asked her to sing for him every day in the office. It was only several years after this that Stella began her illustrious opera career often singing for audiences of over 2000 people.

Stella played her first lead in the Gypsy Baron and went on to perform in a wide range of musicals singing in Night in Venice and playing Nancy in Oliver. She moved on to Opera , singing firstly as a Soprano and in later years as a Mezzo. She sang in over 100 performances of The Marriage of Figaro. Other Operas included Madam Butterfly, The Flying Dutchman, Nabucco, Jenufa, Peter Grimes, Hansel and Gretel, Cosi van Tuytte and Andrea Chenier. She also sang the Mezzo solo in Oratorio including Beethoven’s 9 th Symphony and the Bach B Minor Mass and Misse Solemnis.

Stella engaged in several recordings making 3 LP records including Yom Huledet, Days We Remember (Chag Vashir) and Let’s Make Music. She also formed and sang the Mezzo part in two popular vocal groups performing at private and public events. The first of these was “Music 7”. This was followed by the formation of a similar group, “Take 6”. The piano part was performed by her long term friend and accompanist Evelyn Green of Jewish Male Choir fame.

Over her 88 and a half years, Stella and her Attorney husband Ernest hosted numerous beautiful musical evenings at their family home “Serenata” in Houghton. Stella sang for charity on countless occasions throughout her life bringing pleasure to those young and old, continuing in recent years to sing for the “old folk” even though most of those for whom she sang were young enough to be her children!

Known lovingly as “The Fairy Godmother” she never had a bad word to say of anyone, always searching and finding the good in everything and everyone.
Stella will be sorely missed by her many fans, her cherished friends and her loving family. She leaves behind three sons Andy, Laurence and Brendan, six grandchildren and three great grandchildren.
Above all she will be remembered as a selfless, loving and caring person, someone her children feel blessed and privileged to call their mother.

We all face challenges with advancing age, Stella’s being her mobility. When asked how she was, Stella would reply “we carry on regardless” and implore anyone facing difficulty to “take it in your stride.”

Stella wanted nothing more from life than to help others. She died of smoke inhalation following a fire in the middle of the night. May this be a wake up call to all those living alone, caring for family or friends or those charged with looking after or accommodating the elderly – to ensure that good quality, reliable smoke and CO2 alarms and heat detectors are installed at suitable locations to prevent this from happening again and to ensure that other families do not have to mourn the loss of a parent in this way. Stella would want this to be part of her legacy. With immobility, mental and physical frailty, the elderly are at particular risk should a fire go undetected. 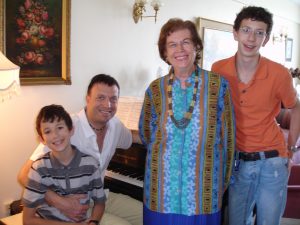 Stella with her musical family – happily singing at the piano