Very rarely over the past 12 years, have I had to use the spotlight for an obituary.  This is one of those rare situations where every word I type is covered by tears—my own as well as those of hundreds of people whose lives he has touched. It is said that the only thing one leaves behind is one’s good name.  Victor has left an enormous legacy for us all.

JACK OF ALL TRADES –

To condense the achievements and serious interests of Victor Gordon into one article is almost impossible. He had so many divergent sides that his story would be better served by a series of articles.  Hopefully, however this résumé will give the highlights of Victor’s career although there is no doubt that he will be remembered mostly as being a wonderful and supporting husband, father and grandfather, a friend of note and an absolute mensch.

The son of Cyril and Ida, Victor was born in Brits and the family moved to Pretoria in 1952.  Victor became a Pharmacist after completing his schooling at Pretoria Boys High. He married Shirley (Herman) in 1966 and the couple moved to London for four years.  On their return to Pretoria, Victor established a business “Medsurg” selling medical and surgical equipment. He was eventually joined by partners Robert Kropman and Hibe Silberg.

Victor has had several serious hobbies throughout his life, all of which have provided him  with immense satisfaction. From the age of thirteen, he acquired three major interests –  music, painting and writing. His first play, “The Clue of the Blue Vase”, was staged at Brooklyn School on the final day of his school year which fired his enthusiasm for greater things.

He began painting when in his teens thanks to a nice set of oils presented to him as a Bar Mitzvah gift.  To date, he cannot recall how many paintings he has completed over the years, but calculates that his sales are just under a hundred, many of which are in foreign lands. Most of his attention is devoted to portraits, landscapes and flower studies.  He has held two solo and a number of joint exhibitions.

Victor was fortunate to have been exposed to music from an early age. His mother was an amateur violinist who instilled her love of music to Victor. At the age of 13, he took up the clarinet and by joining the Boys High Military Band, was given an introduction to the instrument’s workings. By 14 he had formed his first band which opened a whole new vista to his life. Jazz dominated Victor’s life for  many years and he has been playing semi-professionally for over 40 years!.  However, for the past twenty years, his attention turned to classical music which he now finds a great deal more satisfying.

It was only while living in London that his interest in writing plays really started to germinate.  Soon after their return to South Africa, it was announced that television would be introduced in 1976 and it became obvious  that there would be an opening for people to identify with its demands in one way or another. For Victor, the opportunity lay in scriptwriting. Despite having no experience whatsoever, when the SABC launched an “English Drama and Scriptwriting Competition” with a guaranteed production of the winning play, Victor was inspired to write “Fever Ward”. To his amazement, the script scooped First Prize.

He also co-wrote what Victor refers to as “an awful TV series” with Paul Slabolefsky and Joe Stewardson called “The Adventures of Scotty Smith”, followed by a few episodes of the Springbok Radio series “Squad Cars” for Anthony Fridjhon. Victor then submitted “The Stibbe Affair” for the Amstel Playwright of the Year Award, gaining eleventh place amongst more than sixty entries. He regarded this as so encouraging that twelve months later, he re-entered the competition with a play called “Brothers” which scooped First Prize and was subsequently produced by PACT at the State Theatre. It was a critical success and was then produced at the Baxter Theatre in Cape Town. Two years later a new play called “Comrades” won The Combined Performing Councils of SA Award and it too was staged at the State and Alexander Theatres.

The demands of earning a proper living then took priority, but in 2009 Victor wrote “Harry and Ed”,  a play based on the unusual friendship that existed between President Harry Truman and a nondescript Jew named Eddie Jacobson which had a vital influence on the birth of Israel. This play was staged at the Sandton Theatre on the Square.

Next, believing that the Jewish American, Jonathan Pollard, who spied for Israel, was the victim of a terrible miscarriage of Justice, Victor wrote a new play titled “Pollards’ Trial” which came to the attention of well-known Israeli actor and director Roy Horowitz who translated the work into Hebrew. The play opened shortly thereafter at the famed Cameri Theatre in Tel Aviv. Not only did it get a five-star rating from every critic,  but Horowitz won the award for the best director that year.  It became the only play in the history of Israel to receive an invitation to mount a private performance at the Knesset before an invited audience of 350, hosted by the current President, Reuven Rivlin. “Pollards’ Trial” ran on-and-off throughout Israel for over two years. Victor and Shirley recently returned from a trip to Sydney, Australia, where his latest play “You Will Not Play Wagner” had its premier. It, too, was an outstanding success.

His next play which was recently completed was on the life of George Bizos, which received the blessing of Bizos prior to his passing.

Victor’s other interests include “working with my hands”. He was a devoted member of the MG Car Club for 12 years, during which time he restored three vintage MG’s, one dating back to  1938.

The exceptionally talented and popular Victor was also one of Pretoria’s community guiding lights. He was an active member of the Zionist Federation Media Team for the past 14 years, monitoring and countering anti-Semitism and anti-Israel bias in all facets of the media. He served on the Carmel School PTA and School Board, the Jaffa Management Committee and President of the Pretoria Council, S.A. Jewish Board of Deputies for eight years, acting as Vice-Chairman for several years.  Victor was pivotal in arranging the News & Views events at Jaffa, bringing interesting speakers and films  to our community.  His ‘Over Board’ editorial in this magazine was a regular, eagerly awaited read for over 16 years.

He also took over the running of tararam, the South Africa-Israel culture fund for a number of years and wrote many speeches and articles for the Israeli embassy, going back. Victor played a pivotal role on the history book committee, producing the  history of the Pretoria Jewish Community from 1930, currently being produced.

In the eulogy, Rabbi Gidon Fox said “On the one hand this is the easiest eulogy to write. On the other, it is the hardest and one of the most painful. Easy, because there is so much to say. Difficult, because the loss is unbearable. Difficult, because what words can one say, about one of the world’s finest wordsmiths? What tribute can one pay, that will do justice to a life that itself was such a tribute to the gift of life itself?

Yet despite all these talents, Victor did not seek the limelight. Like Moshe in that week’s Parsha, Victor took on positions of import in the community, not because he needed them, but because they needed him. They needed his sage, wise and eloquent advice, counsel and leadership. Despite all this fame, Victor was one of the humblest people I have had the privilege of knowing. A man who struggled to receive compliments due to his humility, yet had no trouble in dishing them out in spades.

He lent his support, time and abilities to communal organisations. Whether it be the history club, Jaffa or indeed any time an MC was needed at a function, or someone was required to give a vote of thanks. When Victor spoke, everyone listened. Every time he wrote or spoke, it sounded like poetry. Every time he opened his mouth, it was music to the ears. When a fabulous guest speaker or guest entertainment was provided in the community, it would not be uncommon for the highlight of the show, to be Victor’s opening or closing remarks”.

Shirley and Victor have two children, Jonathan and Lisa and are also proud grandparents of Amy and Tali.

Victor saw and fought for the rights of others.

“You Will Not Play Wagner”, underscored the insensitivities of the world around us and  revealed Victor’s finely tuned knowledge of history and his unflagging stance on controversial issues.  Victor was a calm, reasoned and factual voice that sounded out in the blizzard of misinformation, disinformation and outright untruths peddled in the media and in society at large about the valiant State of Israel. He enlightened and educated, as his plays changed attitudes for the better. As a playwright and “a mensch”, he was admired everywhere for his erudition and unflagging courage to confront wrongdoing. His whole character is encapsulated in the following excerpt of a poem by Ralph Waldo Emmerson:

‘To win the respect of intelligent people

To earn approbation of honest citizens

To appreciate beauty and find the best in others

in a redeemed social condition

To know that others’ lives breathed easier

This is to have been successful’. 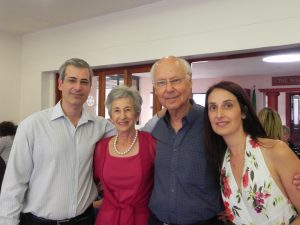 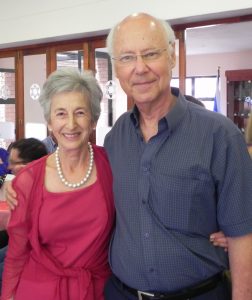 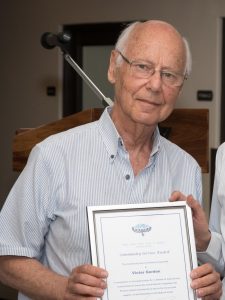