Every Saturday on my return from the synagogue I collect the Saturday Star from where it lies at the end of the driveway. I walk into my home scanning the headlines and checking which articles are worth reading.

I am often amazed at the choice of lead-story but mostly I find it somewhat amusing more than I do offensive. One of the most notable, was at the end of Brexit week when the world stood gasping and contemplating the ramifications of the UK exiting the Eurozone, the Saturday Star led with a piece about the head coverings in the Muslim community. It perplexed me then, and has continued to nag at me that a real live thinking person made a decision that this issue was more suitable for the headline and lead than Brexit.

The article with the headline “Fearless” did no such thing.

It was a lazy, un-researched piece about Janna Ayyad Jihad written by Sameer Naik. An alarming majority of the article is in quotation marks and seems to be a reproduction of a speech that she might give at a rally. Some of her best lines are quoted in bold and read as follows:

I try to live my childhood as best as I can, but it’s hard. When were playing outside, Israeli soldiers come and start shooting at us. We get pepper sprayed and have gas canisters thrown at us. They are stealing our land, killing children, burning children, arresting my friends and injuring loved ones.

Where Jews were meant to have stolen children and used their blood for the matzah? Well that is so 19th Century. Welcome to the blood libel of the modern age. Where Israeli soldiers (Jews) burn Palestinian children at will, where they shoot at them at play and pepper spray them just for good measure.

And thank you Saturday’s (dimming) Star for propagating such falsehood. 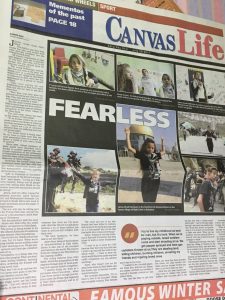 The writer of the article made no attempt to qualify any statement made and somehow fails to mention that the very area from which Ms. Jihad comes, has just in the last week seen the brutal murder of the Salamon family as they sat down to eat their Sabbath meal. A knock on the door would allow a knife yielding Palestinian terrorist to enter and to kill three Jewish family members whilst the mother hid in a room with her children. Knowing full well what was happening.

The writer also fails to mention that many members of Ms. Jihad’s family are known terrorists responsible for the murder of Jews as they ate pizza and tried to live in peace. Peace that Ms. Jihad and her handlers would not want because they are Jews living in Israel – a reality that is so painful to her family that they exalt and celebrate the murder of every Jew.

Israel is a flawed and imperfect State. But one that gives her citizens; Jew, Muslim, Christian and everyone in between full rights. Unlike most Arab States that expelled more than 850,000 people because they were Jewish. Unlike neighboring Arab states where homosexuals are persecuted and murdered, where there is no freedom of speech and where there is institutionalized abuse of women.

Ms. Jihad is very sadly a product of a Palestinian education system that teaches children to hate and to murder. It celebrates death and pays significant monthly stipends to those who have murdered Jews. The terrorist who just last week butchered the Salamons is in fact set to receive more than USD3000 per month because of the so called success of the operation. And if that doesn’t turn one’s stomach and elucidate the Palestinian Authority agenda, then I am not sure what would. 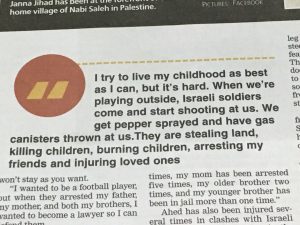 If Israel’s army is indeed guilty of burning children and attacking them for the sake of it whilst they play, if Israeli soldiers shoot randomly while the kids play hopscotch, then surely the Saturday Star should be able to provide substance to it? Surely it’s not an unreasonable question to ask a so-called reputable paper? And by substance one would hope to see real photos and facts and not ones produced by the Palestinian Propaganda machine that includes photos of war-torn Syria masquerading as Israel.

Maybe the Saturday Star should pay more attention to truth and do some fact checking before publishing. Because articles like this one don’t just misinform but will also undoubtedly cause anti Semitism and ultimately more bloodshed.

Unless of course this is what its wants?